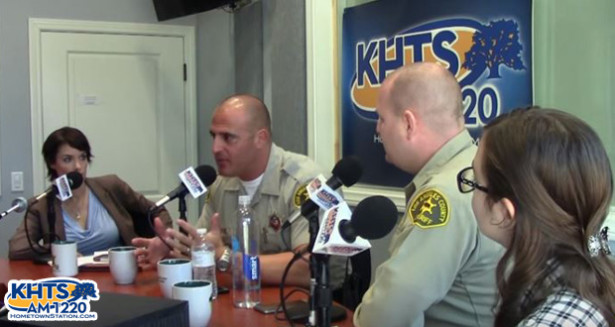 Formerly called “Neighborhood Watch” and sponsored by All American Bail Bonds in Santa Clarita, the revamped “Santa Clarita Sheriff Talk” is slated to air at 10 a.m. on the first and third Thursday of each month.

“What happens often is a lot of people go to the mall and they leave packages in their car, they leave bags in their car and they leave things in plain view,” said Deputy Brian Heischuber, Zone 5 leader in Valencia. “Somebody walks by and sees the opportunity. No one is around, so they’re going to smash the window and take those items.”

Burglars are able to take advantage of the fact that vehicle windows are designed to shatter in the case of a collision by using sharp, pencil-like tools to quickly puncture the window and shatter it.

“It’s the easiest way for them to get in, and it’s not loud like everybody thinks,” said Deputy Chris Craft, Zone 4 leader in Saugus. “It’s a quick little pop and the window shatters, and they’re in the car within seconds.”

Additionally, about 40 percent of vehicle break-ins take place when vehicles are left unlocked in both parking lots and driveways.

“That’s a big problem out here,” Craft said. “People think that their cars are safe in their driveway, which they’re really not…  We walked through the mall parking lot this weekend and we were clearing the parking structure after we had the robbery from AT&T, and we found, I believe, 12 cars unlocked with items inside: purses, cell phones, iPads on the front seat.”

Even piles of clothing, jackets, papers and books left out can lead a potential thief to think there may be valuables hidden under them, Miller added.

Related: Bail Bonds In Santa Clarita: What It Means To Plead In Court

Items of value aren’t the only things a thief might be looking for, according to Craft, who mentioned sunglasses, loose change, money in the center console and vehicle registration as other items that could catch a burglar’s eye.

“Anything they can take, they’re taking,” he said. “So keep nothing visible. Make your car less attractive to these people and hopefully you won’t become a victim.”

Common targets for vehicle burglars not only include shopping center and mall parking lots, but local hiking areas and gym parking lots too.

“They know when you’re going to work out at the gym, you’re going to go hiking, you’re not taking your purse with you or your wallet,” Miller said. “So that’s a place that you really need to be careful.”

Heischuber recommends residents store as much as possible in the trunk, always lock vehicle doors and take advantage of trunk locks some newer vehicles offer. When making big purchases or doing holiday shopping, he advises residents to drop off their newly purchased items at home before they make any other stops.

If your loved one is in custody and they wish to talk to an All American Bail Bonds representative, call: