Bail recovery agents for All American Bail Bonds are looking for a man who is wanted for skipping his court date twice and possibly leaving California, officials said.

Keishmond Jamesasaad Davis, 29, of Cypress, missed his court date on Feb. 19 and again on Sept. 8. 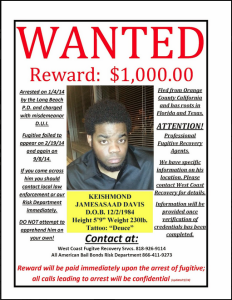 vice president of All American Bail Bonds in Santa Clarita. “We have a nearly 100 percent recovery rate and we know that we will capture Davis.”

Davis is a 5’9” African-American who weighs 230 pounds. He has black hair and brown eyes. He has a tattoo that reads “Deuce.”

Davis was arrested for a misdemeanor driving under the influence of alcohol or drugs with his blood alcohol level reaching more than 0.08, according to All American Bail Bonds in Santa Clarita officials.

“We have reason to believe that he has left California,” Chavez said. “We don’t think he plans on coming back.”

Davis’ wife, Becky Davis and their child, Austin Davis were left behind in Cypress.

“A $1,000 reward is being offered for the capture of Davis,” Chavez said. “We have information on his possible location.”

Davis has ties to Texas and Florida and that may be where he has gone.

“If you come across him, please contact local law enforcement or the All American Bail Bonds Risk Department immediately,” Chavez said. “Please do not attempt to apprehend him on your own.”

If anyone has information regarding Davis, please contact local law enforcement officials, West Coast Fugitive Recovery Services at 818-926-9114 or All American Bail Bonds Risk Department at 866-411-9273.